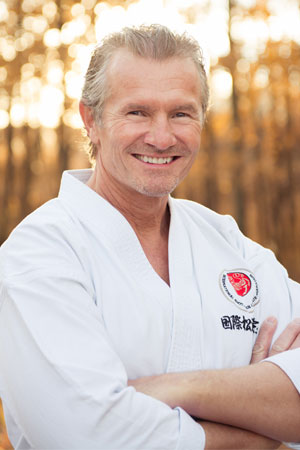 Sensei David Jones began his practice of karate in England during the early 1970s. He established his first dojo in 1978 in Newbury, England and has continued to teach ever since. Sensei Jones was fortunate to have trained with Masters Kanazawa and Enoeda before immigrating to Calgary in 1981. Since that time, he has been a staunch supporter and contributor to the International Shotokan Karate Federation and has been a close and personal student of Master Yaguchi.

Sensei Jones represented Canada for many years in competition. He was a kata finalist in the 1990 World Shoto Cup and was Canadian national kumite champion in 1991. Over the years, he has traveled to Japan many times and has trained with most of the world's leading Shotokan instructors.

ISKF Calgary was founded by Sensei Jones over 30 years ago. His dojo is a full time, custom built establishment that provides classes 7 days a week. With over 250 members and approximately 100 active black belts, the Calgary dojo has a stellar reputation for the quality of traditional karate it offers. Over the years it has produced countless national and international champions in men's, women's and junior competition.

Sensei Jones is the Chief Instructor for ISKF Alberta and Chairman of ISKF Canada. These two long standing, not-for-profit organizations each promote the advancement of ISKF karate and fellowship among students across the country. ISKF Alberta sponsors teams to travel to national competition each year and in similar fashion, ISKF Canada fields teams to represent Canada at international events.

Sensei is a member of the prestigious ISKF Technical Committee and has achieved the rank of 8th dan. He is an A-class instructor and A-class international referee, having graduated from the ISKF Instructor Program in 1994. He currently teaches karate throughout Alberta, Canada and the United States.

In addition to his karate activities Sensei Jones has had a 30 year career, working as an IT manager at the University of Calgary. He now dedicates his time to teaching karate and promoting the ISKF organization and its future success.