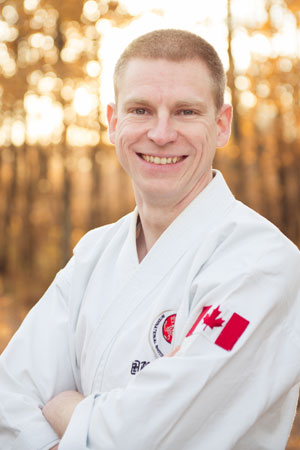 Sensei Robert Morgan, along with Crystal Schatz, provides leadership and instruction in our junior karate program. In fact, Robert himself went through this same program over 25 years ago. Robert has achieved the rank of rokudan (6th degree black belt), is a graduate of the ISKF instructor trainee program and is a 'B' class international referee.

Robert is an excellent instructor. He is patient and thoughtful while at the same time managing to bring out the very best in our students. Robert practices what he preaches and sets a great example in the karate he performs and his training regime. He is a valued supporter of ISKF karate in Calgary, is enrolled in the ISKF Instructor program and travels to many of the various karate events that take place each year.

Professionally, Robert is a software developer having gained a master’s degree in computer science. He lives in Calgary with his family.

Here are some of Robert’s tournament achievements.

"My motivation when it comes to all things karate is about learning and helping others. I'm always excited to train but I think that I’m even more excited to work with the kids. There's something about the look they get when you help them figure something out for the first time that doesn't really compare to anything else".

"My most memorable moment is the first day of competition at the Shoto Cup in Osaka, looking at all those rings in the venue for all the different age categories and getting in the ring for team kumite. The adrenaline, fear, and excitement I felt stepping in the ring against the Slovenian team. It was totally exhilarating and something I will never forget!"